There are so many beautiful beaches in Bulgaria, that can please any taste, ranging from wild, quiet, and relaxing to large resort complexes. Sandy beaches occupy 34% of the Bulgarian Black Sea coastline which covers a total length of 378 km from Durankulak in the north to the mouth of the river Rezovska in the south.

Science is the luminary of a nation, and its literature is its life.

Krapec is one of the largest and finest beaches on the Bulgarian seaside, located near Krapets village, just 10 km north of Shabla, about 90 km from the nearest airport of Varna. Krapec beach is spanning over seven kilometers and in some places is over 400 meters wide. The beach is within the Natura 2000 protected area and reserve.

Northeast of Krapets, just a kilometer is Durankulak lake, where you can find fish such as Pike-perch, Carp, Catfish, Rudd, Bream, Crucian carp, and even European eel. Another attraction nearby is the temple of Kibela discovered on the big island in the Durankulak lake. This is the oldest prehistoric necropolis in continental Europe.

The beach and the surrounding are undeveloped, making the place maintains perfect for people looking for quiet and relaxing place with its wilderness and authenticity.

Ahtopol Beach is located at thetown and seaside resort with same name on the southern Bulgarian Black Sea Coast, close to the border with Turkey. Ahtopol lies within Strandzha Nature Park, which is is the largest protected area in Bulgaria spanning a territory of 1,161 square kilometres.

The beach is about 2 km long with a unique natural phenomenon in combination of pristine nature, coniferous forest, golden and fine sand, and calm and crystal clear sea water. In the summer and in the fall the ares is suitable for surfing and bodyboarding.

Pasha dere is over 4 kilometers long beach strip located in a protected area called Liman. With its wild nature, clean beaches and water is one of the most beautiful places along the Bulgarian Black sea coast. Pasha Dere beach is a perfect place for people who look for wild beach experiences such as quiet and isolated beach.

Pasha Dere is a beautiful wild beach some 15 km south of Varna near the seaside highway, connecting Varna and Bourgas. There is a walking trail starting from from Galata to Pasha Dere beach, perfect for people who enjoy walking in nature.

Driver’s Beach is one of the most famous and attractive wild beaches on the South Black Sea coast. It is easy to access, just 37 km away from Bourgas. It is a great place for those who want quiet peace on the beach. The beach is close to the Alepu Swamp natural landmark and is also popularly known as Alepu Beach.

The driver’s beach or also called Alepu Beach is a sandy strip of shore, south of Duni resort. It has a wonderful view and is located between the resort of Duni (from the north) and Cape Humata. The dunes along the beach are home to rare sand plants and have been declared a natural landmark.

Which of These Beautiful Beaches in Bulgaria Have You Visited?

Let me know if you have visited any of these beautiful beaches in Bulgaria or if you know others we should mention. Tag @stunning_bulgaria on Instagram and hashtag it #stunning_bulgaria. 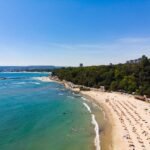